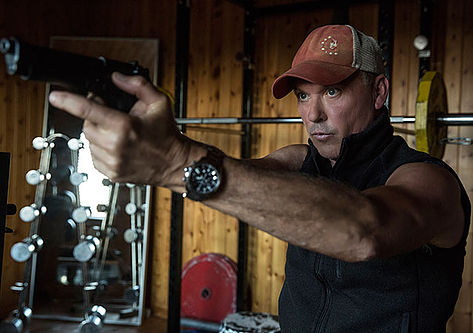 The “American” film brand has had its fair share of hits and misses, but as you’d expect from the title American Assassin it’s mostly on target. While the film would’ve been much more thought-provoking and introspective under the direction of Atom Egoyan, it’s Michael Cuesta at the helm. Having directed Kill the Messenger and Homeland, you can get a good idea of what to expect in terms of the look, feel, temperament and territory of American Assassin. We’re supplanted in the world’s current “war on terror” mentality as hot-head Mitch Rapp is recruited as a counter-terrorism agent. Struggling to come to terms with a tragic incident, he channels his special abilities and years of preparation into getting bad guys for the good guys.

American Assassin is a sleek, tense and well-paced espionage action thriller with earnest performances. Young Dylan O’Brien leads the charge as Rapp under the tutelage of special ops veteran Michael Keaton, effectively playing a Gabriel to Lucifer, played by Taylor Kitsch. He’s young, somewhat enigmatic and lithe, making a fresh change from the typical wrestler-ready hero that would drive this espionage thriller with old school ’80s style actioner tendencies. Keaton is the drill sergeant turned boxing coach, giving Rapp the full boot camp experience with a twinkle in his eye. Even though he’s playing a role built for the modern day Bruce Willis, his sheer star presence adds weight to the production much like the casting of the brilliant David Suchet. Then, while at times difficult to distinguish, Kitsch gets his Christian Slater stripes as a callous, relentless, equal-opposite villain.

The film follows in the tradition of Homeland and numerous counter-terrorism thrillers, making it a little indistinct in terms of plotting, leaning on sketchy characters, a fairly generic story with an emphasis on style over substance. To put it plainly, it’s dumb fun… pumping things up with flashy action sequences and grounding itself with sincere performances and a timely counter-terrorism undercurrent. O’Brien is perfectly cast in this respect, keeping in the shadows just enough for us to interpret his thin characterisation as mystique and delivering the cantankerous yet impressionable character with conviction. It’s easy to skim over the mission details when the lead trio are ramping things up with bravado.

While tending towards the formula of old school master-apprentice action thrillers of the ’80s, Cuesta’s managed to craft an entertaining, exciting mix of espionage and black ops thrills. While lightweight, it packs a punch, keeps things upbeat yet tense and has a strong follow-through that separates it from other films in its subgenre. While it may not engage your mind beyond the next mouthful of popcorn, it’s an enthralling and enjoyable film, which is made better by the quality of its cast.