Deadpool 2 is the sequel to Deadpool… duh! Thankfully, it’s not a simple rinse-and-repeat or one of those sequels that just supersizes everything. The original Deadpool made quite a splash (sorry), taking its irreverent brand of superhero action comedy to some wacky and wicked places. It… the first Deadpool… was very committed to adapting its “brand-new” comic flair, reinventing some of the typical superhero tropes and delivering a very self-aware film experience. This has been continued into the sequel, directed by Atomic Blonde’s David Leitch, brandishing much of what made the original Deadpool such a shiny novelty and adding a few bells and whistles. Going to places you wouldn’t expect, the sequel manages to maintain its unconventional head-between-legs stance, venturing into discombobulated comedy and mixing it up with some almost smart college humour.

Deadpool 2 operates at a borderline offensive level much like the comedy of Ricky Gervais, who admittedly likes poking fun at soft targets, doing it in such a way that it’s fleeting and not taken too seriously. While the outrageous comedy angle is still very much a part of the sequel, there’s much more heart with Reynolds getting a chance to flex his dramatic love muscle (his heart) opposite his girlfriend, Vanessa, and in trying to protect a sidekick kid from New Zealand… surprisingly not a hobbit. It’s an intricate balancing act, trying to dip into the offbeat, irreverent and dark comedy realm only to shift gear for some much more substantial drama and emotional weight. Surprisingly though, through Deadpool’s many misadventures, loaded chirps and self-referential gift of the gab, it manages to keep a lid on the hotch-potch… with a little help from his little friends.

The main thrust of Deadpool 2 is in generating enthralling action set pieces, flipped out comedy and eye-popping visuals. Deadpool 2 tries to ride the crest of this wave of mutilation, introducing fresh meat… erm characters, breaking the fourth wall and trying to create a laugh-a-minute tone with a devil-may-care attitude. The new Deadpool operates with plenty of bravado and flips the superhero genre upside down, playfully referring to other superheroes within the X-Men universe, poking fun at his unique position as a near-invincible loose cannon for hire and even taking pot shots at the film studio itself. It’s all done with plenty of wink-wink charm and creates a bubbly and unpredictable tone for the film, much like Mike Myers did for Wayne’s World.

“All right, Mr. Numbskull… I’m ready for my close up.”

Ryan Reynolds is instrumental in the making of this film as producer, co-screenwriter, voice artist and lead actor, owning the performance and serving as circus conductor too. While violent and gory, with a high body count, the dead-eyed ninja hero blood and guts is counterbalanced by the playful attitude of the filmmakers. It’s a spirited, funny, irreverent… did I mention irreverent… and entertaining superhero flick that’s dysfunctionally cool and fearless in terms of self-deprecation. This zany escapade leverages many classic superhero gimmicks, offering its own spin whilst lampooning the genre as a whole. The madcap pacing is staggered by some feel good pop songs from yesteryear, including a great reworking of that super hit by HA-HA.

While Ryan Reynolds has played Green Lantern and the ill-fated Weapon XI, Deadpool seems to be the perfect fit for the charming and likable actor. Renowned for the college comedy Van Wilder and making a name for himself as a versatile comedy actor, he is the obvious choice. You could of course imagine fellow Canadian, Jim Carrey, donning the red-and-black mask with his trademark wacky, comic celebrity but Reynolds just seems like a more natural fit. In many ways, Deadpool is reminiscent of The Mask sporting a trickster hero, but as tempting as it’d be to see Jim Carrey’s take on Deadpool… he’s getting old, would probably want more rubber face time and has already solidified himself as whats-his-name… you know, that hard core army dude in Kick-Ass 2.

Deadpool’s a much more challenging role than many would guess, forcing Reynolds to either work from behind the mask or from behind a mask of make-up.. probably not both at the same time. The actor has to rely quite heavily on his smirky vocal range in order to sell the character, as his expressions are generally limited by facial prosthetics. Thankfully Deadpool 2 isn’t big on drama… this isn’t Monster… giving him relative freedom when it comes to portraying the plucky Deadpool. Reynolds is ably supported by a solid cast, serving as the front man, yet opening the door for some good camaraderie between a live-action Josh Brolin as the Terminator aka Cable, a zippy Zazie Beetz as Domino, the chubby kid from The Hunt for the Wilderpeople and supporting characters you’ll probably recognise from the first Deadpool.

Deadpool 2 is definitely not for everyone, packed with broad pop culture references, inside jokes, ultra-violence and a twisted sense of humour. Fans of the original will be pleased with this installment, which has found its feet and an emotional core, making it that much more involving. Deadpool 2 is a curious addition to the Marvel superhero universe that adds a fresh dimension with its unconventional and cocky attitude. Reynolds is in fine form, the eclectic and street-wise writing keeps you on your tippy-toes and its brazen commitment to foolhardy fun makes Deadpool 2 a guilty pleasure worth repeating… oh, and an improvement on the original. 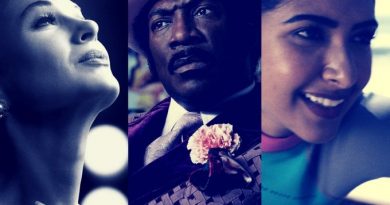 Talking Movies: Judy, Dolemite Is My Name and Deep End

Talking Movies: The Prodigy, Velvet Buzzsaw and How to Train Your Dragon: Hidden World