Queen arrived before its time, operating in a theatrical, experimental, innovative and larger-than-life fashion that intrigued and even scared people. Still regarded as one of the greatest music acts ever, it seems only appropriate that we honour the memory and musical ability of a rock legend, who was whisked away too soon. The sprawling music biopic operates in a channel of rhapsody tackling the glorious (and not so glorious) years leading up to Queen’s legendary appearance at the groundbreaking Live Aid concert in 1985. In many ways reflective of its titular rock anthem, Bohemian Rhapsody moves with an emotional rhythm and fun-seeking spirit rather than a meaningful message and historical accuracy.

Bohemian Rhapsody made a powerful and intriguing movie trailer, cleverly taking the best Malek-as-Mercury moments from the film to induct the Mr Robot star. It’s strange to think of him playing a Kimmy from Full House type role in War at Home now that he’s won an Oscar. Although, you’ve got to start somewhere and it took a lot longer for Leonardo DiCaprio, who broke into the entertainment world with his role in Growing Pains. Hopefully, Malek hasn’t supplanted Mercury in pop culture, but rather served as an avatar and tribute to awaken the legacy and introduce a whole new generation to the music of Queen.

Rami Malek is not a spitting image… but is there any actor who closely resembles Mercury’s angular and unique look? Having to incorporate prosthetic teeth to resemble Mercury’s jaw, he’s the perfect man for the job after Sacha Baron Cohen dropped out of the project. While Malek is only 2cm shorter and 4kg lighter than Mercury, he just seems slighter, especially if you contrast the closing credit performance from the real Mercury. Malek may be the dark horse choice, shifting his weight from television to film as a rising star, but delivers a knock out performance that actually makes him the first choice in retrospect. He comes close to resonating Mercury’s larger-than-life stage presence: striking the right pose, shifting about the stage like a cat, blending his vocals and adopting an accent. The success of Bohemian Rhapsody hinged on a spirited powerhouse lead and Malek charges headlong, earning his nomination and walking away with a justifiable win.

The supporting cast of Queen bandmates features Gwilym Lee as Brian May, Ben Hardy as Roger Taylor and Joseph Mazzello as John Deacon. Their casting makes it seem like the results of a lookalike competition, allowing some of the surviving band members to feel like they were watching themselves. While Mercury takes the spotlight, their supporting performances adopt the right temperament, are critical and mirror much of the band’s media profile and politics from a safe distance. The real co-star here is Sing Street’s Lucy Boynton as the doting Mary Austin, who shifts up a gear for a more dramatic turn enjoying good chemistry opposite now real-life boyfriend, Rami.

Credited as being directed by Bryan Singer on the actual film, Dexter Fletcher took on the role of unsung hero. Perhaps it was Singer’s ’80s metal band take on X-Men: Apocalypse’s villains that captured the attention of Bohemian Rhapsody’s prime instigators. Or maybe his surname did the trick? While he’s no Cameron Crowe and his personal life has been riddled with question marks, he seemed like the right choice at the time. While his involvement has been downplayed amid all the love for this long-awaited music biopic, perhaps his noteworthy work and troubled relationship with the press helped immerse him in Mercury’s lonely and surreal world.

Bohemian Rhapsody follows the tried-and-tested formula of many other music biopics, where bands get together, struggle, reach the pinnacle of fame and threaten to dissolve. It’s been compared with Walk Hard: The Dewey Cox Story… the John C. Reilly led spoof of music biopics. While the beats are familiar, it covers Mercury’s family dynamics, his primary relationships and squabbles among bandmates. Through the moments and montages, we piece together a broader picture of the sometimes safe and often ambiguous behind-the-scenes story. They’ve gone to great lengths to recreate the age, the look and the attitude; and it remains a timely film thanks to themes and a spotlight on prejudices around xenophobia, homosexuality and AIDS.

Malek is a force and dons the moustache proudly with great gusto and enough confidence to carry the film, but there’s a naïve air to the drama with Singer managing to leverage tension almost as if by accident. Listening to Queen’s greatest hits, watching their concert engagement and learning the origins of some of the songs, gives the film more depth and instant credibility, even though it isn’t entirely accurate and doesn’t really break much new ground. The film’s real triumph is its beautiful, meticulous and visceral recreation of the Live Aid concert as an entry and exit point. Bohemian Rhapsody ends on a powerful note, cementing Freddie Mercury’s legacy in true “the show must go on” style while adding fresh meaning to the lyrics of some of the most popular hits. It’s a heartfelt blast from the past, an entertaining trip down memory lane and a worthy tribute to the charismatic and unforgettable Queen frontman. 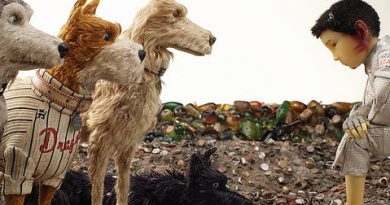