The Whale Caller is based on a novel by Zakes Mda about a complicated love affair between a man, a woman and a whale. While this whale of a tale may have worked within the bounds of an imaginative literary work, it’s a much trickier balancing act as a live-action film. Writer-director Zola Maseko will probably attest to this, having been at the helm of this challenging and fundamentally flawed adaptation.

Where better for a story about a whale than Hermanus Cove? The popular South African whale-spotting destination is the setting for this unusual coming-of-age fantasy romance drama about a man who must decide between his first love, a whale named Sarisha, and a wandering soul named Saluni. Beautiful natural vistas and moody backdrops become the mystical setting for the alternate reality of The Whale Caller.

Operating within the genre of magic realism, Maseko stitches the grit of social realism with the child-like wonder of fantasy. Harsh realities such as alcoholism, bad language and forbidden romance are scattered by a pure, playful and delightful innocence. While you can see what co-writers, Maseko and Mda, were aiming for… the result falls well short of their lofty ambitions.

The Whale Caller struggles with a camp, contrived and theatrical tone. Focussing on Saluni’s story, there are comical undertones as the filmmakers attempt to immerse their audience in this big fish world. The fable quality would have been easier to accept if it had been told from the perspective of a storyteller or if they had opted to animate it like mesmerising dramas, The Red Turtle and The Prophet. As a live-action fantasy romance drama, one can appreciate the vibrant colours and visually-compelling elements, but the loose-knit and wayward storytelling makes it difficult to engage with and follow.

The performances are adrift, struggling with the motivation and depth necessary to anchor them in this suspended reality. It’s a real challenge for the actors to add texture to these flat characters, who lack the nuance and contact points necessary to connect with the audience. Unsure of where to gauge the tone, it becomes a puzzling and strange journey propelled by its own weird energy.

The visual effects are used sparingly, but are mediocre and obvious without being pushed along by the story. While the Whale Caller’s regal suits are impressive, the anything-goes thrift store wardrobe is less so, alienating us from this sometimes cheesy slice-of-life. As if we weren’t already struggling to get into the right frame of mind, The Whale Caller allows its characters to repeatedly break into an odd subplot involving the lyrics and beat of a pop song from African-fusion pop group, Freshlyground.

The Whale Caller is plagued by tonal inconsistencies and aggravated by naive decision-making. For example – no parent would be okay with a complete stranger bathing their children. While there’s a blossoming fairytale beneath it all, the film only has glimpses of this poetic and magical place, distanced by an uneven tone, awkward choices, lacklustre CGI, thin characters and uncertain performances.

Movie Review: Once Upon a Time in Hollywood 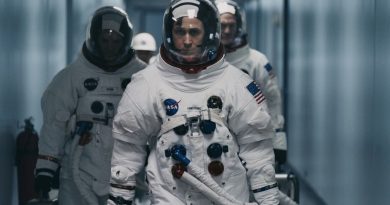