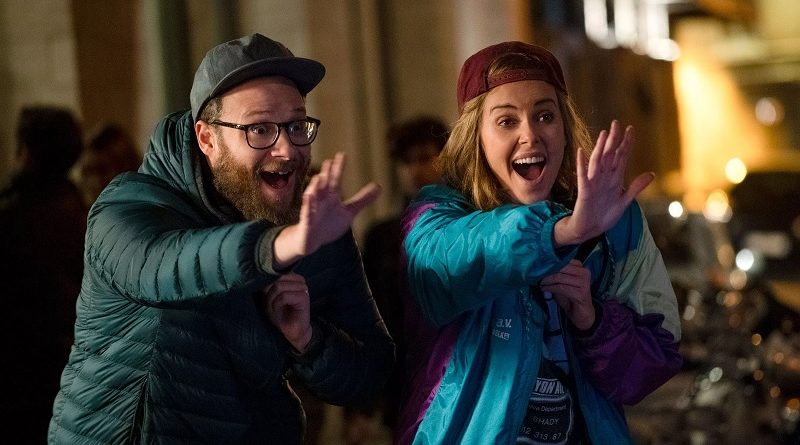 Long Shot is a romantic comedy from 50/50 director, Jonathan Levine, which stars Charlize Theron and Seth Rogen. The political and satirical romantic comedy centres on an odd couple, who reconnect in later life. Opposites attract as we become acquainted with a loose cannon journalist, with an outfit inspired by The Fresh Prince of Bel Air, and a near-perfect shooting star politician on the verge of announcing her campaign for President of the United States.

Charlize Theron and Seth Rogen are an unlikely couple, who work surprisingly well on screen. Theron has a face that could launch a thousand films, which often makes her seem aloof and perfectly cast in Snow White & The Huntsman. While she’s best known for her ever-expanding collection of strong dramatic work, she’s surprisingly adept at comedy too, having guest starred as a socially-challenged girl-woman in Arrested Development and revealing her funnier side in the offbeat comedy dramas, Young Adult and Tully. Long Shot is probably her most fun, easy-going and amiable performance to date, playing a powerful secretary of state who’s married to her job and in need of a holiday.

Rogen liberally applies his signature brand of humour to Long Shot, ranging from crude to stoner comedy. While he’s been on a bit of a hiatus film-wise, doing more TV and the odd bit part, he returns with one of his most charming film performances in years as an eccentric and spirited journalist. While the couple are day and night, it helps that Theron and Modern Family’s Eric Stonestreet were once linked romantically, selling the idea that the picture perfect beauty could fall for a lovable oddball.

While referencing Pretty Woman, the match up is probably more in line with Notting Hill, operating in a political realm yet adopting a similar structure and dynamic. Rogen may not be as handsome as Britain’s favourite fop, but is just as captivating as the ordinary guy underdog. While posing as a throwaway comedy, there’s much more happening below the surface, which probably explains part of the reason Theron agreed to star in a film typically below her station.

It’s a chance to play the most influential woman in the world, something some would argue is quite close to the truth already. Then, it’s also an opportunity to have a romantic comedy where the actress features in the starring role as strong and powerful woman. It may not seem all that progressive on the surface, yet there’s a definite agenda underscoring environmental and gender issues in the name of dorky, fun-filled nerd-gets-the-head-cheerleader comedy.

Laced with political satire around what it takes to win an election, toying with the idea of the first female president and operating with boundless optimism, it’s refreshing based on its unusual pairing and whiff of ’90s nostalgia. Charming co-lead performances, a curious mash up of comedy and some thought-provoking political ideas make for an entertaining and mostly enjoyable film. While infrequent, some of the comedy and language is risque and bound to offend if you aren’t used to Rogen-style movies. It may be cringeworthy and distasteful at times, yet Long Shot’s overriding message is noble and it’s always about the fun, making it easier to smooth over the intermittent indiscretions.