Softness of Bodies is a curious, cool, moody and sensual dark comedy drama about a young American poet trying to find her feet in the Berlin scene. Focusing primarily on the misadventures of a reckless young woman named Charlotte, the film’s hedonistic appetite and live-for-the-moment attitude are translated into a stylish film with an independent spirit. Centred primarily around a sphere of losers, it becomes preoccupied with the downward spiral of a student who seems to make the wrong choices.

Starring Dasha Nekrasova, whose voice sounds like Scarlett Johansson with a similar look to Brie Larson and aura to Greta Gerwig, she’s a perfect blend for the here and now. A talent to watch, Softness of Bodies was constructed to become a vehicle for her to shine, which she does. Operating like a tramp, she attempts to stay true to herself, slumming it in order to get by and latching onto men around her without weighing up the consequences.

Dealing with a jilted ex-boyfriend, who is trying to win her back, involved in an affair, staving off the advances of a fellow poet and trying to keep her head above water, it seems as though she’s perpetually on the run. While her roommate seems to be the most reliable companion, she is also spurned when it comes to female relationships, in direct competition with a fellow poet who is onto her as well as becoming a target as a result of an affair. 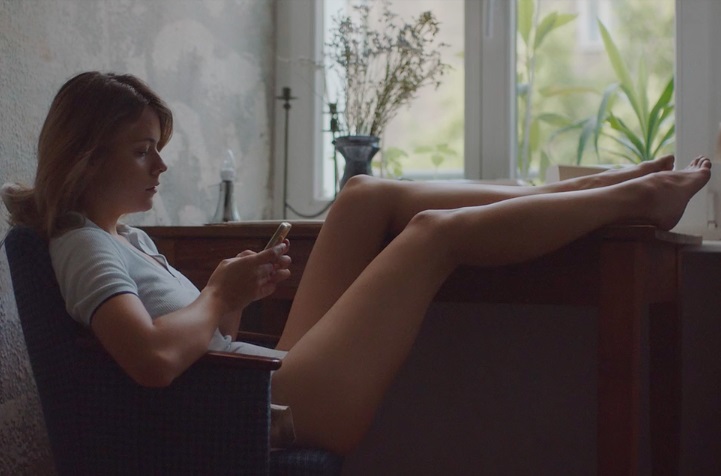 While Into the Wild followed Christopher McCandless and his misadventures across the United States leading up to a tragic season of living off the land, Softness of Bodies is the opposite, as a young woman finds her foray into the urban jungle riddled with all sorts of dangers. Jordan Blady cites Party Girl as a strong point of reference, a film which saw Parker Posey playing Mary in a similar position to Charlotte.

Dealing with kleptomania, the foolishness of youth and the slow sink of crime, Softness of Bodies has parallels with films like Run Lola Run and The Bling Ring. Opting for a sense of realism in terms of the production design and styling, director Jordan Blady has also imbued the film with a subtle yet slinky sensuality. Expressed in the title itself, it comes to mean both lust and fragility, two aspects that underpin this spirited comedy drama.

Using sleek cinematography, synth music and opting to shoot mostly by night, Softness of Bodies has an underground feel, which is reinforced by the poetry scene and its intentionally alternative existence. Tapping into the millennial mindset of simply making it work, doing whatever you love and expecting handouts in the process with the noblest of intentions, Softness of Bodies serves as a timely commentary. Something of a cautionary tale, the unfurling is intriguing, almost as intriguing as our lead’s general demeanour. Her devil-may-care attitude gives the film a similar edge to Control as the moth moves closer and closer to the flame.

The pacing is good, the writing is thought-provoking and crisp, and the runtime is relatively short at 75 minutes. Seemingly running from one hurdle into the next, our protagonist tries to dig herself out continually making the situation worse, progressively raising the stakes and further alienating herself. Mixing with the wrong people, the situation worsens and without the love and trust of faithful friends, she becomes lost and scattered.

While somewhat choppy in terms of its storytelling, it latches onto solid performances and good casting, allowing Nekrasova to bounce off her able supporting cast. Berlin is quite harsh, allowing the relationships to serve as the emotional playground. While quite self-centred and vapid, Charlotte’s quest to essentially wipe the slate clean and sidestep serious matters becomes the burning issue, which compels this unusual dark comedy drama.

The quest for artistic purity will resonate with many audiences, something that becomes a main theme for Softness of Bodies. You want Charlotte to figure things out, find real love and hopefully learn from the situation, as Nekrasova draws a surprising amount of empathy for the self-absorbed character. While the vapid and hedonistic groundswell serves as a strength and weakness, it remains a cool, understated and effective drama.