This week, we’re talking about crime thriller, a coming-of-age comedy drama and a crime comedy biopic.

Based on the absurd but true 1973 bank heist and hostage crisis in Stockholm that was documented in the New Yorker as the origins of the ‘Stockholm Syndrome’.

– Stockholm syndrome is the psychological phenomenon whereby hostages feel sympathetic feelings towards their captors
– Stockholm lives up to its promise of absurdity, set in an age where bank heists were more like high risk smash-and-grabs.
– The hostage crisis scenario has become a bit clichéd over the decades, requiring filmmakers to put a fresh spin on the traditional bank robbery, especially when shooting in Hollywood-friendly english.
– Budreau is able to lean heavily into the true events, which largely follow formula, re-teaming with Hawke after the Chet Baker biopic, Born to be Blue.
– It’s refreshing by virtue of its ’70s vibe when it comes to fashion, music, cars, manners and perceived lack of technology
– Hawke brings hot-headed spontaneity to the reckless one man show, forming a kinship with his most valuable hostage, Bianca, played with fortitude by Rapace.
– the tense hostage drama sees her character thawing as her resilient and guarded first impressions are soon disarmed.
– Stockholm has similarities with ‘Argo’ in terms of its retro style and tongue-in-cheek attitude, treating a serious scenario as a game
– Absurd enough to retain its comedy edge, the fun and games begin to dissipate along with the Police Chief’s patience.
– The twists-and-turns keep things moving as alliances shift, unfortunately the comedy undertones undermine some of the suspense even when the stakes are raised.

Megan Tucker struggles to pick up the pieces after losing her husband, home and possessions.

– marrying against her mother’s wishes with a baby on the way, a super mom finds herself penniless and at the mercy of the state after her husband is imprisoned and her home is repossessed to defray outstanding debts
– led by Diaan Lawrenson, who is supported by Renata Stearman and Neels van Jaarsveld, you’d expect a film with substantial dramatic characters
– unfortunately, the screenplay is thin and the film relies on montages and food preparation in order to translate the inner life of our protagonist
– the production design and wardrobe is colourful and quirky, coupled with editing that would suggest an offbeat comedy drama, but it just simmers
– Table Manners starts with promise, fast-forwarding to the predicament at the expense of building a likable lead character and elliciting empathy
– this disconnect makes for a fairly alienating viewing experience, which is further distanced by thin characterisation, an uneven tone and scattershot storytelling
– while it aims to be a film that appeals to lovers of food and style, it remains elusive, lightweight and naïve
– the seasoned actors try to add depth, but table manners is ultimately too slow-moving and uninvolving to entertain
– it coasts on unrequited promises, proficient cinematography and the quality of its ingredients, struggling to be anything more than a cute and colourful distraction with a hopeful message

Local Pennsylvania polka legend Jan Lewan develops a plan to get rich that shocks his fans and lands him in jail.

– Jack Black is one-of-a-kind, an actor whose charisma, energy and distinct facial features make him unforgettable
– while known for going over-the-top, he was restrained to good effect in the true crime drama, Bernie
– he approaches The Polka King, operating in much the same channel, which is also based on a true crime story
– taking place in a small Pennsylvanian town, centring largely on The Polka King and his larger-than-life exploits, we get a curious character study about a charming immigrant whose diligent entrepreneurial efforts were sidetracked by greed in a Ponzi scheme
– while Black was cast according to a likeness of personality rather than looks, he brings the same whimsy and warmth that he did in Bernie
– a kitsch comedy drama biopic, The Polka King immerses one in the strange little world with performances from Black himself
– while not quite as good or quirky as Bernie, it remains just as entertaining in its chipper, offbeat and candid manner
– featuring a great supporting performance from Jacki Weaver, one can’t help but feel that they were trying to coax the same small town oddball feel of Bernie 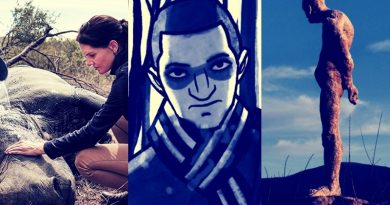 Talking Movies: Parasite, The Land of Steady Habits and Papillon