In an age of reboots and remakes where spandex isn’t cool enough for superheroes anymore, it’s always refreshing to get a truly original film. People want the superhero city demolitions, the nitrous-injected super cars and natural disasters to escape into the make-believe and feel good about life. That sigh of relief when the credits roll may work for mainstream audiences, but for the ardent art house fans and self-confessed cinephiles… it’s more of the face-slapping same. Hollywood knows how to make money off respawning ideas, redirecting fandoms and harnessing franchises, but it’s much more difficult to bank on a pioneer, to create something fresh, new and original.

Quentin Tarantino may be the go-to guy when you want to rekindle your flagging, teetering on the edge of has-been career, but now there’s the Safdie brothers, Benny and Josh. These young, tenacious film-makers have got talent and channel their independent spirit through their offbeat films. The crime thriller Good Time starring Robert Pattinson was their real breakthrough, giving the actor a chance to truly shed his sparkling Twilight skin in favour of an unconventional and challenging lead role. They saw something in him and the result was a win, giving Pattinson grit through a much-needed shake up and allowing the Safdies to get more attention for their electrifying and budget-defying film.

Uncut Gems proves Good Time wasn’t a one hit wonder. Writing the film as if with Sandler in mind, the hit-and-miss movie mogul gets a chance to flex his dramatic acting muscle once again. The Safdie brothers have a knack for peeling away layers from typecast actors with their original, relentless and gritty indie-style film-making. Adam Sandler doesn’t disappoint, rising to the occasion with one of his best performances. The actor has done serious a number of times in films like Punch Drunk Love, Reign Over Me, Funny People and The Meyerowitz Stories. In Uncut Gems, he matches the intensity and tenacity of the Safdies through charming and brazen jeweller, Howard Ratner. 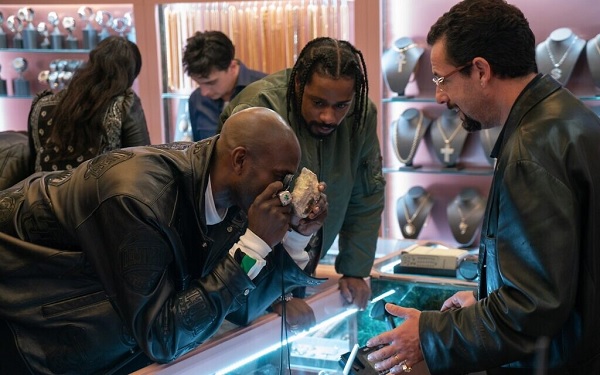 “I’m telling you, you can see your previous life in there.”

We get right into the nitty-gritty of the jeweller’s predicament, venturing into his tense, stressful and high-stakes world as the charmer tries to flog a precious stone for a small fortune. Trying to up-sell celebrities, sporting icons, wheeling-and-dealing with pawnbrokers and staying one step ahead of merciless gangbangers, Uncut Gems is a perpetual pressure cooker man-on-the-run crime thriller. Using retro music, embracing a magpie appetite for all that shines and immersing us in the cutthroat lifestyle of a man gambling with almost every department of his life, it’s a high-risk high-return meltdown.

Thanks to brilliant casting, most of the performances come across as a natural overflow as if plucked from the very inner city streets the film takes place on, adding realism and sense of dirty urgency. Their faces add to the storytelling without the actors having to try too hard, making the risks razor sharp and the threats deadly serious.

The retro video game inspired music isn’t a new concept but suits the film as if trying to tap into the sleaze of old school video games like Leisure Suit Larry. This choice echoes the Safdie approach, which is to leverage the best possible film given the available resources. This gamble works as do many of their deliberate stylistic choices in this entertaining yet unsettling crime thriller. Uncut Gems is its own master and this is what separates the Safdies from other filmmakers, safeguarding their artistic autonomy and creative control.

Playing into its title and central item, the shimmer intrigues, the rough casing holds it altogether and the sharp edges cut deep. The mesmerising visuals are often at odds with the grittiness giving Uncut Gems a sense of texture and style, employing a duality in which it’s garishness has its own kind of finesse. Gripping, unsettling and full of spirit, it’s a strange brew, leveraging its sleazy undercurrent in a wonderfully compelling tale from the New York underground.

Riddled with bad language and violence, it’s definitely not for sensitive viewers but is wholly original and surprisingly engaging with a steady stream of rich storytelling and creative film-making. Uncut Gems was one of the big snubs over the award season, but has earned the Safdies the necessary respect to take on bigger and even bolder film projects going forward. 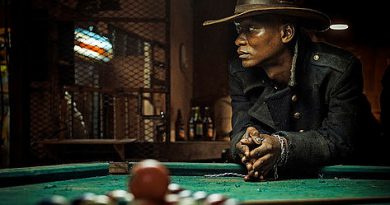