Spling reviews Planet of the Humans, If Beale Street Could Talk and Crawl as broadcast on Talking Movies, Fine Music Radio. Listen to podcast.

This week, we’re talking about an environmental documentary, a romance drama and a horror thriller.

Starting off with a documentary now available on YouTube…

PLANET OF THE HUMANS

This eco-documentary attempts to blow the lid on the hypocrisies of the renewable clean energy movement.

– Planet of the Humans is a climate change documentary presented by prolific documentarian, Michael Moore
– As writer, producer, director and devil’s advocate, Gibbs asserts the environment movement is largely an illusion propagated by billionaires, politicians and corporate agenda.
– The main argument is that green initiatives are overly reliant on traditional fossil fuel to be created, installed and seen as sustainable.
– Debasing wealthy businessmen and key proponents, who are driving renewable energy projects for profit, Gibbs suggests their efforts are insidious and ineffective.
– The documentary leans heavily on the research of interviewee, producer and ‘Green Illusions’ author, Ozzie Zehner
– It’s a dangerous and controversial viewpoint that relies on old data and the testimony of small town professors, anthropologists, authors and candid interviews with locals and media representatives.
– Skimming over some clean energy projects, failing to interview leading energy experts and doggedly pushing his stick-it-to-the-inside-man agenda, Planet of the Humans doesn’t try to understand the nuances of the debate.
– Gibbs is intent on “winning” the argument with emotion – panning across dilapidated houses in a failed solar farm town, poking fun at the efforts of renewable energy projects and leveraging heartrending footage of orangutans affected by Indonesia’s palm oil deforestation without even addressing that issue.
– While the documentary is dangerous in the way it twists the truth, the film does create awareness, demonstrate that renewable energy is profitable and that green agencies aren’t sacred or beyond reproach.

IF BEALE STREET COULD TALK

A young woman embraces her pregnancy while she and her family set out to prove her childhood friend and lover innocent of a crime he didn’t commit.

– This is the follow-up film to Moonlight for Jenkins, who was heaped with praise for his poetic and moody Best Picture-winning drama
– based on a book by James Baldwin, he attempts to rekindle the tender magic at the heart of his Oscar-winning film
– Moonlight had a terrific ensemble and Jenkins harnesses his cast’s collective power once again, leaning on his co-leads in Layne and James with an award-worthy turn from King
– the original jazz fusion score is another highlight, playing like a detective story in the vein of Body Heat
– this is an elegant drama, artful in execution, moody in design and surreal in its smouldering intensity trying to capture fragments of life
– the slow-burning pacing allows Jenkins to focus on the nuance of his gentle and tender drama without rushing scenes
– the storytelling may be a bit too slow-moving and non-linear for some, but rewards the patient with its intimate love story set against the backdrop of civil injustice in America
– while tender, the love story has a cool distance making you feel like a bystander rather than an inhabitant
– If Beale Street Could Talk isn’t in the same league as Moonlight but still holds many of the same thoughtful qualities

In trying to rescue her father, a young woman finds herself trapped in a flooding house during a hurricane.

– Aja has made many commendable horror thrillers, enough to prove his worth and reliability
– his latest offering, while compact, is an all-out spectacle relying quite heavily on special effects and CGI
– ordinarily, hurricane films tend to overplay the disaster tipping into unintentional comedy in their effort to entertain
– while Aja has a good balance, offsetting this against the claustrophobic confines of a flooding basement and introducing man-eating creatures, it does have some fundamental issues
– one problem with these kinds of horrors is that revealing the creature too soon can subvert a great deal of suspense and tension
– having a full view of what lurks below blunts the fear factor and turns the film into a game of cat-and-mouse
– having parallels with Spielberg’s Jaws, it seems almost obvious to hold off the reveal for as long as possible to spare resources and focus the clout of the most important visual effects moments
– centred on Scodelario and Pepper, the two deliver convincing and defiant performances that help anchor the extensive visual effects
– managing to submerge a basement and small rural town, there’s never a doubt when it comes to the devastating effects of the hurricane
– what Crawl lacks in suspense, it makes up for in competence, crafting a well-acted and consistent horror thriller

IF BEALE STREET COULD TALK… an artful, moody, slow-burning, surreal and tender romance drama with fine performances… A solid 7 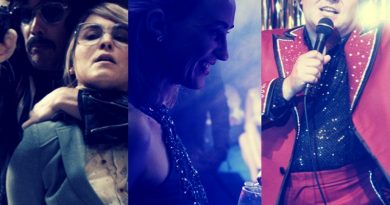 Talking Movies – An Inconvenient Sequel: Truth to Power, Victoria and Abdul and We Don’t Belong Here

Talking Movies: I Care A Lot, The Vast of Night and A Bad Day for the Cut