South Africa is starting to realise its potential as a horror movie machine. While the crime genre also remains largely untapped, it makes sense that local audiences would gravitate to escapism rather than being bombarded by hard realities. Horror deals with real issues in a metaphorical way that creates a buffer. Godzilla was Japan’s way of dealing with the fall out of nuclear war and it seems as though we’re on the cusp of an exciting new chapter of film-makers who grew up with video stores and ’80s horror.

The international scene is already showing great promise with a revival of classic remakes with some of the best horrors landing in the last few years. The genre has a wide spectrum ranging from shoestring budget productions like Paranormal Activity to the rarer $200 million epics like World War Z. South Africa has proved its perfectly poised to entertain both types of productions, having the stories, folk lore and talent to create horror films with clout on an indie budget and equally able to accommodate $40 million blockbuster horrors like Resident Evil: The Final Chapter.

While it’s early days yet, there have been several films that demonstrate we have what it takes. 8 is the latest local horror to echo this sentiment. Also known as The Soul Collector, the horror mystery serves as a great example of what can be accomplished. The story follows Lazarus, an old man who’s seeking atonement after trading his daughter’s soul. Starring Tshamano Sebe, Inge Beckmann, Garth Breytenbach and introducing Keita Luna, it’s a distinctly South African production directed by Harold Hölscher.

While a feature film debut, Hölscher has given us a glimpse of his budding talent with the haunting short film, Langsaan. The 8 screenplay has been in the works for a decade after a friend’s untimely passing, which prompted Hölscher to explore traditional beliefs around the passage of a soul. Incorporating religious, folk lore and traditional healer elements, led to the birth of this intriguing mystery horror story. Set in 1977, the film embodies a number of classic horror genre devices and films from Hölscher’s childhood.

“Souuuulll, I hear you calling…”

Aerial shots of a car traversing an isolated landscape, a family settling into a rural home with dark secrets, the film definitely has its influences. While 8 borrows aspects from The Shining, Pet Sematary and The Innocents, the story is fresh and surprisingly thoughtful. The filmmakers have really gone to great lengths to steep us in quality, using authentic production design and silky cinematography to make this local film a cut above. While 8 leans on classic horror elements, it’s not bound by the genre rules, dexterously handling a tale of an anti-hero in wolf’s clothing.

Tshamano Sebe is best known for Of Good Report and delivers a captivating and well-balanced performance as the pivotal character, Lazarus. This complex lead character is constantly shape-shifting and encapsulates much of the dramatic interest at the heart of 8. It’s an excellent showcase for Sebe, who rises to the occasion with a fine performance marked by great conviction and sensitivity. Another highlight is Keita Luna, who is perfectly cast… playing into the wide-eyed wonder, enigmatic intelligence and naivete of young Mary. While Beckmann brings an old world elegance and Breytenbach’s down-to-earth warmth shines through, their supporting roles lack depth and their relationship dynamic is underwritten.

The dialogue is a bit clunky at times, the storytelling has some noticeable inconsistencies and a few missteps unfortunately lead to unintentional comedy. Thankfully, these moments are fleeting and don’t offset the narrative’s driving force and film’s overall composure. While a chilling horror, it’s not quite as scary or suspenseful as it deserved to be, keeping a good pace and leveraging some good performances to keep you invested in the story. Perhaps the nostalgic lens and handling of the prime evil diffused some of the suspense. Still, 8 is impressive to behold and builds to a cataclysmic fever pitch, taking some curious and thoughtful risks, most of which pay off.

8 straddles the divide of artful horror and pure popcorn escapism, creating layers of textured, high quality story material yet operating on a glossy, superficial level. It’s elegant, earnest and effective as an intriguing ensemble horror mystery drama yet undermined by loose characterisation and a see-sawing script. It’s a respectable production, well-versed in horror tropes, playing out of its league, ambitious in its vision and fueled by pure passion. 8‘s good enough for you to sit up and take notice, operating with a unique vision and unusual care, but is limited by its underlying flaws. 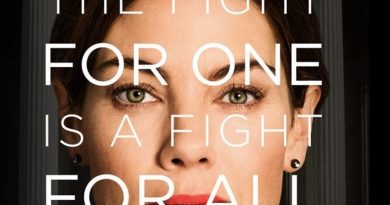