Podcasts
October 16, 2020 Spling a life on our planet, david attenborough, i am not a witch, talking movies, totally under control

Spling reviews Totally Under Control, I Am Not a Witch and David Attenborough: A Life On This Planet as broadcast on Talking Movies, Fine Music Radio. Listen to podcast.

This week, we’re talking about a political documentary, a satirical mystery drama and a nature documentary.

Starting off with a film now on Apple…

An in-depth look at how the United States government handled the response to the COVID-19 outbreak.

– Political, edgy, incisive, intrepid and brave… Totally Under Control is the kind of documentary Michael Moore would have loved to make.
– Yet, this startling and timely documentary is directed by Alex Gibney, the award-winning and renowned filmmaker behind The Inventor: Out for Blood in Silicon Valley.
– It carries the same weight and topical appeal of Farenheit 9/11 and Sicko without pandering to Moore’s penchant for drama and satire.
– Gibney’s vision and style isn’t as inflammatory, in spite of using the 9/11 death toll as a marker, but takes a note from the title demonstrating a calm control in presenting this important and infuriating documentary.
– Through news reports, interviews, in-hospital footage, emails, social media and contrasts with South Korea’s handling of the outbreak, Totally Under Control builds a definitive play-by-play account of the US government’s pandemic response.
– This documentary’s cool, calm and collected approach makes it about the facts over the emotion, something that reporting tends to overlook in today’s media-saturated world.
– What’s brilliant about Totally Under Control is that it’s able to offer a well-balanced and comprehensive overview with an international perspective in the space of 2 hours.
– With elections on the horizon, this sharp documentary exposes the careless leadership, political corruption and mismanagement of a dire situation, the devastation of which, could have been mitigated.

I AM NOT A WITCH

In a remote Zambian community, Shula, a 9-year-old girl is denounced as a witch.

– I Am Not a Witch is essentially an African mockumentary, which will help you appreciate the film’s strange ebb-and-flow and drifting edit.
– Starting in a small community, a young girl’s sheer presence provokes villagers who accuse her of being a witch, relegating her to a tourist attraction hub for women accused of witchcraft.
– Nyoni’s film is edgy in the way it blurs the fine line between fact and fiction, mocking ridiculous accusations, outmoded perspectives, gender politics and those wishing to bend the system for their own benefit.
– Aware of the real camps, devastating communal accusations and fanatical attitudes toward any form of bad luck, apparent magic or foresight it’s difficult to find the funny when it’s taken from the perspective of a child.
– Maggie Mulubwa is the kingpin of the film, a young actress whose earnest and naive performance grounds the often surreal misadventure.
– The subject matter is dead serious, yet I Am Not a Witch offers enough of a twist on reality to toy with convention and make a statement without becoming preachy.
– I Am Not a Witch is potent, armed with some powerful visuals, descending into a poetic, meditative state after a lively exploration.
– As a social commentary about gender relations and witch hunts, it has layers but may lose some with its choppy approach to storytelling.

DAVID ATTENBOROUGH: A LIFE ON OUR PLANET

One man has seen more of the natural world than any other – this is his witness statement.

– Attenborough is the natural historian and broadcaster who made a name for himself by writing and presenting documentary TV series Life on Earth and The Living Planet.
– Having spent most of his 94 years travelling the planet and exploring life on earth, he’s led an extraordinary life being honoured with a knighthood, widely regarded as a national treasure.
– Yet, he’s less concerned with accolades and more worried about the future of our planet on its current trajectory…
– The slick documentary charts the earth’s population growth against the dwindling percentage of wild life and threat to bio-diversity through black and white footage of his earliest expeditions, interspersed with amazing photography from more recent ones.
– It’s a comprehensive overview of earth’s most critical threats from climate change and deforestation to poaching and the depletion of natural resources.
– Having been at the forefront of the most rapidly advancing changes in our earth’s fragile ecosystem since the 1950s… Attenborough is perfectly positioned to advocate for change.
– Chronicling his career and the earth’s most critical challenges, the last part of the film is dedicated to projecting 100 years into the future and offering solutions on how we can subvert rapid deterioration.
– Attenborough provides a powerful and sincere testimony, reflecting his sage thoughts and calling for greater awareness, more accountability and forward-thinking.

I AM NOT A WITCH… this surreal see-saw satire is compelled by a strong lead performance, edgy themes and powerful visuals… A solid 7!

DAVID ATTENBOROUGH: A LIFE ON OUR PLANET… an important, slick and powerful call-to-action and chronicle of an extraordinary life… An excellent 8! 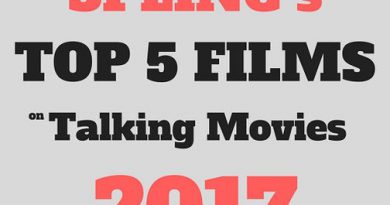 Talking Movies – The Exception, I Am Bolt and Billy Lynn’s Long Halftime Walk

Talking Movies: Bird on a Wire, The Beatles and World War II and Woodwind