Toorbos can be interpreted from Afrikaans to English as “Dream Forest”. Adapted from one of Dalene Matthee’s novels set in and around Knysna, it’s written and directed by Rene van Rooyen, who’s best known for co-writing Hollywood in my Huis, Vaselinetjie and Mooirivier, which she also directed. This passion project has been 8 years in the making and van Rooyen’s cinematic understanding translates beautifully to screen in one of the most mature and quietly powerful films to come out of South Africa.

This coming-of-age romance drama and psychological character study could be described as a blend of My Fair Lady, The Grapes of Wrath and Atonement. The classic rags-to-riches tale of a woman being transformed by the modern conventions of high society and finishing school etiquette has some resonance. Parallels with The Grapes of Wrath are expressed through the mature yet heartfelt adaptation set against the Depression era ’30s with a focus on the socio-economic plight of the “bosmense”. The tie-ins with Atonement are experienced through the film’s wistful tone and themes around innocence, remorse, beleaguered romance and passage of time during a similar period.

Set in Knysna in the 1930s, Toorbos journeys with the free-spirited Karoliena Kapp, a teenage girl living in an impoverished forest community. Inextricably linked with the forest, she’s uprooted and whisked away to the town by a dapper gentleman who wants Karoliena for his wife. Still timely even by today’s standards, Toorbos grapples with Karoliena’s identity as a wildling, her deep connection with nature, her role as a woman, the memory of her late father and her quest for personal freedom. Set against the forced relocation of a poor community, Toorbos has tremendous depth of meaning and layers as her coming-of-age tale unfolds.

Starring Elani Dekker and Stiaan Smith, the two have a natural connection that compels the emotional core of this windswept romance drama. The focus of Toorbos is on Karoliena and Dekker’s fresh face, natural charm and immersive performance keep you transfixed. Using a pidgin form of Afrikaans and journeying with Kapp through the personal significance of taking on the role, there’s an earnest and heartfelt honesty beneath it all. Smith is more proper and purposefully starchy as Johannes, playing a well-to-do rescuer who sees rich potential in Karoliena. Balancing a tricky performance as a misguided yet patient husband-to-be, he draws empathy in spite of his conservative mindset. 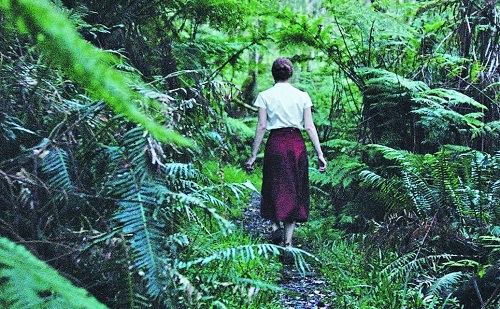 Some of Toorbos’s best moments are contained in Dekker’s interactions with supporting co-stars Ira Blanckenberg as the hardened Meliena Kapp, Clare Marshall as the refined Miss Macmaster, Gretchen Ramsden as the forlorn Hestertjie and Ivan Abrahams as the soulful Bothatjie. Blanckenberg’s supporting performance underpins the dramatic integrity of Toorbos, honouring superb casting with a strong performance as Karoliena’s mother. This fine performance echoes the film’s innate and naturalistic immersion when it comes to character, which extends to every extra showing great attention to detail and a firm belief in the overarching vision for the film.

Toorbos is set against the Knysna forest, which features strongly with rich symbolism in its contrasts between the two worlds. Constant echoes in the visual aesthetic and a poetic tone bring the literature to life, using invisible effects to realise the story’s enigmatic quality. The sweeping visuals transport you to the 1930s, the stripped down yet effective mis-en-scene anchors you in the bygone era and the immersion is completed via a magical soundtrack. Enveloping audiences in the rich soundscape through accurate depictions of music through to creating an organic tapestry of sound, it’s designed to be experienced in all its fullness.

Toorbos is elevated by strong performances, excellent casting, poetic visuals, stirring themes, full-bodied sound, grounded dialogue and masterful storytelling. Swathing the audience in classic narratives, dexterously handling the socio-economic and political backdrop and compelling audiences on a rewarding emotional journey, van Rooyen has delivered a masterpiece. Toorbos is somewhat restrained by its modest budget and there are a few story transitions that could have used more polish, but it demonstrates van Rooyen’s depth of talent, resourcefulness and pure inspiration. This dark horse of a film’s rich insights, immersive quality and steady control of craft make it an all-rounder and a must-see.