This week, we’re talking about a deep space drama thriller, a quirky western comedy and an environmental documentary.

A three-person crew on a mission to Mars faces an impossible choice.

– Stowaway is a character-driven drama that centres around a deep space mission gone wrong.
– Featuring a solid cast, this film is led by Anna Kendrick who takes on a complex role not unlike Sandra Bullock in Gravity.
– What starts like any space mission, replete with lift off turns into a race against time as critical decisions need to be made after a stowaway is discovered on board.
– While this film is visually detailed and as appealing as most space drama thrillers in its league, it’s the performances that set it apart.
– Taut enough to play on stage, the morality drama becomes the crux as altruism and sacrifice become watch words.
– While a little slow-moving, much like Gravity, this drama could have happened almost anywhere under similar do-or-die circumstances.
– Powered by an emotive soundtrack, solid performances and translating the intellectual and emotional turmoil into gut-wrenching drama, it’s effective and haunting.
– There’s another timely dimension to this drama based on the character profiles but it’s still just as compelling from a humanistic point-of-view.
– Offering a thought-provoking dilemma, delving into the grey area of mission vs. human life and challenging audiences with its heroic yet open-ended resolution, its stoicism, fine cast, detailed production design and realistic take make all the difference.

The lines between hero, villain and damsel blur as a man sets out on a quest to marry his fiancee.

– Pattinson may have first gained prominence for his part in Twilight, but has demonstrated his brimming talent with a string of bold lead performances in Good Time, The Lighthouse and Tenet.
– Damsel is no different, allowing the actor to revel in the quirkiness of this offbeat Western.
– Its independent spirit and bizarre mix of comedy drama is primarily centred around the concept of a damsel.
– The characters are captivating even if not fully explored, creating a colourful tapestry and shapeshifting story that’s entertaining even if fleeting.
– Built on Pattinson and Wasikowska’s hefty performances, it’s a strange balancing act as a small circus of outlandish characters parade their reckless behaviour in a bid to amuse.
– Beautiful on-location photography frames the western as traditional elements are given a fresh spin, tending to rely on its wilderness, quirky tone and big gun actors.
– Spirited, unpredictable and at times moving as if by association, this nutty jaunt loses its true North and slips out of its historical context from time to time.
– Losing something in the handover along with its momentum, there are still enough thoughtful ideas, offbeat comedy moments, fun performances and entertainment value to muster a watch.

And finally a documentary on Amazon Prime…

Filmmaker Rob Stewart exposes the illegal fishing industry that threatens the survival of the world’s sharks.

– Stewart is the documentarian who brought Sharkwater to light, exposing the shark fin soup industry and affecting positive change through awareness.
– Something of a sequel, the filmmaker sets about gathering more footage of ongoing exploitation within the fishing industry with repercussions on a global scale.
– Pinpointing red flag ports, governments and stakeholders he sets about uncovering even more exploitation in his bid to redress the world’s perception of sharks.
– Jaws and the pop culture proliferation of sharks as deadly apex predators, in spite of only killing about five people a year, has made it difficult for people to truly care about the creature or its impending decimation.
– Tackling the widespread and ongoing devastation of the shark fin industry and governmental apathy Stewart’s misadventures take him on a sprawling journey, which see him doing some dangerous undercover work.
– His heroics, life’s mission, near-death experiences and fatalistic philosophy eventually explain why this documentary is scattershot.
– While more fearless and focused than Seaspiracy, the impetus here is on sharks making some startling observations and creating awareness in spite of the documentary’s generalist ambitions.
– Sharkwater:Extinction would have been much more powerful as a character portrait, identifying a bold filmmaker’s life ambitions, but finds itself in a place where it’s entertaining, experiential and even exciting if not quite as sharp as it is a haunting.
– While impassioned, the pull between awareness campaign, entertainment spectacle and fitting tribute leave it important yet lost at sea.

DAMSEL… entertaining performances and an amusing tone steady this quirky western and offbeat comedy after a near-fumbled change-up causes it to lose momentum… A flat 5!

Talking Movies: Mank, I Am Woman and Control 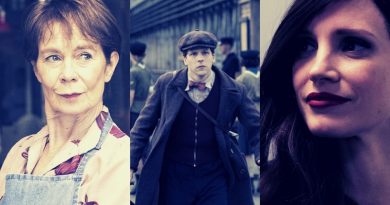