Another Round (Druk), an arthouse The Hangover, won Best International feature Oscar and set tabloids alight with talk of an American remake starring Leonardo DiCaprio. The timing of this news could have been much better, ushering in the contentious debate about the ever-widening stigma about the cannibalisation of subtitle films. This has only been amplified in recent years, becoming the cherry on the top at the very prestigious event where Parasite recently disrupted the notion of foreign films and the seemingly insurmountable “wall” that is subtitles. Even the renaming of Best Foreign Language Film award is an attempt to deconstruct the invisible wall that has long separated Hollywood from the rest of the filmmaking world.

While an American awards ceremony, Hollywood’s dominance and imperialism has made it the widely accepted ultimate recognition for actors and filmmakers. The Academy Awards have been there to acknowledge great work but after flagging viewership statistics, it seems as though the red carpet glitz and glamour is becoming irrelevant. If Stanley Kubrick and Alfred Hitchcock, two auteurs regarded as true greats, didn’t receive a golden statuette for their work as directors… it’s safe to say that the Oscars don’t always get it right.

The Danish coming-of-age drama, Another Round, is now available to watch free and online as part of this year’s virtual European Film Festival. Starring Mads Mikkelson and directed by Thomas Vinterberg it’s finally won the duo an Oscar but does seem like a double nomination based on the their previous film, The Hunt (Jagten). Centred on a witch hunt at a preschool, The Hunt is actually superior to Another Round, capturing the mounting tension of a small community who believe a beloved teacher has molested one of their children based on her testimony and hearsay. The Hunt was unlucky to be nominated in the same year as an equally powerful French drama, Amour, but has been somewhat redeemed by this echo years later.

Echoing The Hunt, Mikkelson plays another teacher… this time at a high school. History has become the whipping boy of subjects when it comes to snooze fests, leaning into this cliché through a washed out man who has slipped into a joyless, unmotivated and “be ordinary” channel. Having grown numb and succumbing to the mundane, his senses are reawakened at an after work hours celebration where he and three other teachers unveil their master plan. Having a “resting” blood alcohol level of 0.5 seems to have worked wonders for politicians and musicians, which pre-empts an undercover “study” on the benefits with less concern over the effects. 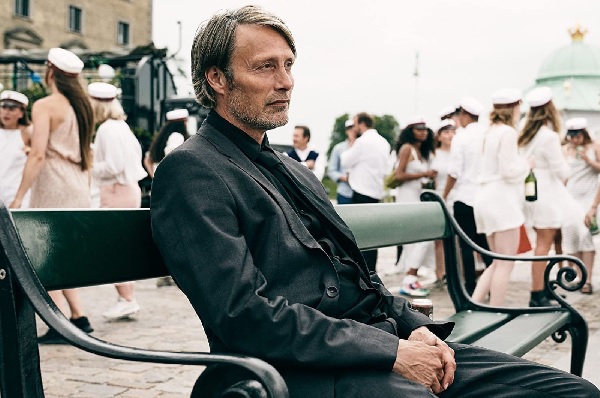 Starting with the recklessness of youth as teens compete in all sorts of alcohol-inspired competitive party activities, this is contrasted with the mid-life crisis belt of weathered teachers trying to ramp up their performance. Cleverly arguing that alcohol is your secret little helper, Vinterberg includes title screens to help gauge blood alcohol levels. The risks of the study seem obvious and even ominous within the context of a school environment, keeping a healthy tension in Another Round. While DiCaprio was debauched in The Wolf of Wall Street, it’s easy to see how a remake with the big name movie star would work without a hitch… it worked for The Girl with the Dragon Tattoo.

Mikkelson’s compelling face captures the lead role succinctly through storytelling that doesn’t spell everything out. Powerful expressions do so much more than dialogue could even hint at as this “play with fire” morality tale unfurls. Generally-speaking, the countries that make up Scandanavia love their coffee almost as much as they love imbibing alcohol. There’s a reason there are so many restrictions on sales and why its even smuggled across borders. This gives Another Round a social conscience and a much sharper edge in its dissection of what it means to drink in moderation and responsibly.

While Casino Royale’s unmistakable villain is Another Round’s star, he’s ably supported by several solid performances and great casting choices in Thomas Bo Larsen, Magnus Millang and Lars Ranthe. The drama starts dry, building intrigue and racking up tension in direct relation to the characters’ sobriety. Secretly being under the influence of alcohol keeps the drama taut and unpredictable, understandably allowing aspects of comedy to filter into this dangerous game. Vinterberg balances the tone masterfully, preventing the humour from upending the seriousness of the subject matter.

As you’d expect, Another Round has been elegantly filmed and avoids the temptation to include cellphone screens or cute visuals to show non-verbal social interactions. It’s an all-rounder of a film, allowing a showcase performance for Mikkelson who experiences a great number of emotions from the loftiness of pure joy to the pits of sorrow as he tries to get his lust for life back. The contrasts and deeply human element are further expressed in the soulful music with singing from barfly choruses to school choirs.

While there’s a Dead Poet’s Society undertone, the real focus is on the men as the secret project threatens to ruin everything as they continue to flirt with alcoholism. Another Round offers a full spectrum in its commentary… playing devil’s advocate in the first act, slipping into the madness in the second act before trying to present a more circumspect resolution. The closing scenes are rather ambiguous, keeping the film free of an open-and-shut feel and allowing the discussion to continue devoid of fixed judgement and well beyond the credits.

Another Round is an entertaining, soulful, taut and even touching viewing experience. Offering insights into Denmark’s drinking culture, delivering strong performances, swathing us in pure cinema and keeping audiences engaged through its tense and unpredictable storytelling, it’s worthy of its many accolades. Sporting a formula that could essentially work in any country where alcohol is seen as a social lubricant or sports drink, it’s easy to see why an actor of Leonardo DiCaprio’s stature would be interested in making it more accessible to those who fear seeing words on screen.