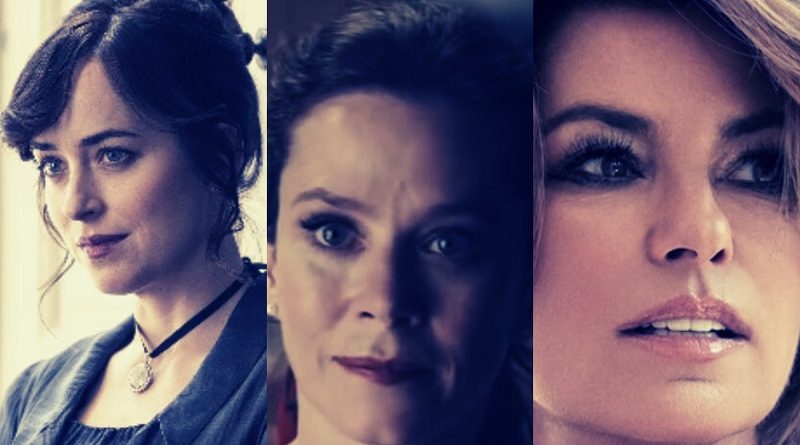 Spling reviews Persuasion, Charming the Hearts of Men and Shania Twain: Not Just a Girl as broadcast on Talking Movies, Fine Music Radio. Listen to podcast.

Eight years after Anne Elliot was persuaded not to marry a dashing man of humble origins, they meet again.

– This is a modern version of Austen’s classic “will they, won’t they” romance, going for something more self-aware and revisionist.
– Starting with a scene that may recall the windswept Poldark, a cliffside impromptu sweet-nothings picnic sets Persuasion in motion with an artful aesthetic and modern affectations.
– Persuasion is led by the well-balanced and soulful Dakota Johnson as the forlorn Anne Elliot.
– While taken from Johnson’s perspective with a Bridget Jones undercurrent, it features a sprawling ensemble with Cosmo Jarvis essentially a rugby-playing Colin Firth, Golding as a handsome devil and a delightful Grant conjuring up the excitable highs of Bill Nighy and Christopher Walken.
– The sweeping cinematography catches you off guard, moving from the interiors and the conventional décor of aristocratic living with farcical patter to living paintings and epic natural vistas.
– This unconventional take may disappoint Jane Austen traditionalists in many ways, from its integration of modern English, contemporary music and breaking the fourth wall to its diverse casting.
– While ambitious, slow to start and uneven at times, this buoyant and fanciful film mostly manages to connect its big swings with enough good humour to forgive some of the misses.
– What Persuasion lacks in poise, sophistication and exclusivity, it more than makes up for with original flavour, spirited performances and entertainment value.

CHARMING THE HEARTS OF MEN

A widow attempts to rescue her family estate and devoted staff by whatever means necessary during the politically-charged early ’60s.

– Charming the Hearts of Men is a character portrait about gender politics with echoes of the social commentary around gender and race from The Help and Green Book.
– Centred on a sophisticated woman now entrusted with the well-being of a soon-to-be-bankrupt estate, we journey with her as she tries to secure a job, rekindle romance with a worthy suitor and move on with her life.
– While her humble efforts are met with cynicism and discrimination, she toils on exposing the system’s numerous entrenched inequalities from the age.
– Set in the South, it’s curious to see a number of recognisable actors brandishing their Southern accents.
– Led by a tender yet tough Friel, there’s a level of gamesmanship to her societal adventures as her actions, determination and values come to inspire and eventually influence far-reaching change.
– Having a gallant and spirited cast, it’s also not short on charming and curious characters, many worthy of their own spin-off.
– Charming the Hearts of Men wields some heavy and important issues but does so with a lightness of touch and some vivid world-building.
– Often amusing and always colourful, the messaging may get a bit murky from time to time but its enjoyable compelled by an earnest, well-meaning and uplifting tone.
– While a fairly modest production, it’s clearly a passion project in a self-assured directorial debut from DeRose.

And finally a documentary on Netflix…

SHANIA TWAIN: NOT JUST A GIRL

From Nashville newcomer to record-breaking international icon, this is the story of singer Shania Twain.

– The free-spirited Shania Twain crossed over from country to mainstream pop music, essentially releasing a greatest hits album in Come On Over.
– A household name, her catchy yet emotive music and iconic music videos sent shockwaves as a star was born.
– Not Just a Girl follows a fairly formulaic music documentary path by journeying with Twain from her humble origins, singing in bars from an early age to her runaway success, dramatic setbacks and comeback trail.
– A comprehensive overview of her career with never-before-seen footage from her earliest days as a performer, this eye-opening and expansive documentary manages to encapsulate Twain’s biography, her highs and lows in the space of 90 minutes.
– Crowley crafts a vivid portrait of Twain from candid interviews with producers, studio engineers, collaborators, friends and Twain herself.
– Not Just a Girl isn’t simply a vanity project, unearthing some hard truths about family, relationships, the industry, discrimination and Shania’s disappearance.
– Influencing the country scene, inspiring a generation, putting on rock star concerts, battling her demons and being unapologetically herself, Not Just a Girl is a spirited, entertaining and empowering music documentary.
– While the film isn’t as boundary-breaking as Twain, it serves up a competent, comprehensive and compelling overview of Twain’s story up until now.

PERSUASION… while unconventional and irreverent, this modern period romance drama is well-acted, handsome and entertaining… A solid 7!

CHARMING THE HEARTS OF MEN… a colourful, entertaining, spirited and well-acted romance drama in spite of its muddled narrative… A satisfactory 6!

SHANIA TWAIN: NOT JUST A GIRL… while formulaic, this spirited music documentary turned character portrait is an entertaining triumph… A solid 7!

Talking Movies: The King of Laughter, A Castle for Christmas and Adrienne

Talking Movies – In the Shadow of the Sun, The Hitman’s Bodyguard and Get Out