Athletes acting; the thumbtacks in the sandwich of cinema. A cameo or (however infrequently) a lengthy performance by a sports star in the role of themselves has rarely lent much to whatever film they’re in, but this is exactly what makes the rare positive contribution by an athlete to a film’s cast so refreshing, and occasionally endearing. For this list we have selected only individual players, if a film incorporates an entire team into its plot, we have to narrow our selection down to the teammate with the largest part in the film. Without further ado, let’s commence with the slim pickings:

Marino is the victim of a kidnapping just begging to be solved by Jim Carrey’s bizarre Ace Ventura. Dan is a horrendous actor, and his most memorable contribution to the movie is in helping to out the film’s trans villain, somehow the only way to prove her guilt. F-, please do not see me after class.

Rousey has the opportunity to beat ‘Turtle’ to a pulp as part of a very one-sided bet. This is great entertainment because everyone in Entourage is a horrible human being, and their suffering is a small respite from their presence, and from the film.

Trevino is on screen for 3 seconds at most. Why bother? Well, Gilmore’s obnoxious villain makes the mistake of offhandedly suggesting that Grizzly Adams had no beard to speak of. This will not stand, and so, an unnamed Trevino pops up to exclaim, perplexed, that Grisly Addams did have a beard, before once again disappearing from the film.

Blink and you’ll miss this cameo. Gilkey is seemingly the only player or attendee at Shea stadium who’s taken his eye off the game for long enough to spot the flying saucer appearing overhead. It’s one of the more memorable gags in the film, as an awestruck Gilkey gets K.O.’d by an errant baseball.

While Lou Gehrig (Gary Cooper) is the titular pride of the Yankees, the Babe, who of course knew Gehrig for the duration of his tragically truncated baseball career, takes on the supplementary role of himself; signing a few autographs and knocking out a homerun to fulfill a promise to a sick young man (only to be bested by Lou’s two homeruns). While the performance is perfectly adequate, context really enhances this entry: Ruth had been retired for 7 years prior to the film’s production and had to lose a significant amount of weight shortly after the one-two punch of a car accident and heart attack in order to be camera ready; weakening his condition and resulting in a bout of pneumonia and a hospital stay once he’d completed the shoot.

Garnett’s obsessive desire for the Howie’s prized opal is what sets the highwire plot of Uncut Gems in motion. Like everyone featured in a Safdie Bros. movie, Garnett comes across as totally genuine, even as his publicly mellow persona grows agitated and covetous of the prized opal.

In his only screen appearance, Lou Gehrig opted to forgo the obvious and make a western. He leaves baseball behind for country livin’, and comes up against a posse of crooks. A particularly good exchange when an inexperienced Lou tries to saddle up on a horse: “Jus’ walk right up to him like ya’ wasn’t afraid”, and Gehrig’s response: “I couldn’t be that deceitful”.

Lance’s inspiring speech reads as a little different knowing what we know today, but considering that Dodgeball is a farce already, the moment might be all the funnier for it, especially the line: “I’m sure this decision won’t haunt you forever”.

As you might gather from the title, Robinson features in close to every scene of the film. He’s not terrible, and the demands of the script are far from onerous, rendering Robinson something of a passenger in his own career, but the first African American to play in Major League Baseball is, of course, most natural on the field. There is only one truly great shot in The Jackie Robinson Story: a climatic swing seen from just behind first base whereby Jackie hits an earthshattering home run.

The only non-American on the list: Adam Sandler’s Jim wants to teach young baseball-hopeful Tyler to be more confident behind the plate as a batter. Seeing as they’re on vacation in Sun City, all Jim has at his disposal for the lesson is cricket equipment, and Dale Steyn himself. Tyler has a tough go of it, as an oblivious Steyn pitches in to correct Sandler’s terminology, and is intimidated first by Jim, and then by the pipsqueak Tyler.

Athletes seem to enjoy Sandler’s company. The famously flagrant tennis star features in a primetime news recap of the titular Mr. Deeds’ misdoings from the night before, delighting in chucking eggs at a passing car before leapfrogging over it, avoiding certain death in true Spider-Man style. McEnroe then berates the driver in convincing, and familiar, fashion.

In the only silent film on the list (a handicap that most of our other entrants could have benefitted from), the titular Speedy needs to make a quick buck by taxi-ing citizens. By happenstance, his first customer is the most famous baseball player of all time; finished with his afternoon visit to an orphanage, Ruth hails the cab, and not only that, he’s in a hurry to get to Yankee Stadium. Babe is then taken by Harold Lloyd for the worst cab ride of his life (but certainly not the worst that week in New York city).

Jordan is no Brando, but he can mug, he can pull the occasional wacky face, and knows where to keep his eyeline when interacting with the non-existent Looney Tunes; leagues ahead of the unfortunate sequel. Plus, there’s just no beating charisma.

Good news; the gang (hungover amnesiacs Alan, Stu and Phil) have discovered where the tiger trapped in their wrecked hotel bathroom originally came from. Bad news; it turns out that they stole it from Mike Tyson, who air drums casually to ‘In the Air Tonight’ before decking Alan across the face. The air drum is near-iconic, and Tyson doesn’t need any help selling a punch (even a fake one). He’s got an odd presence as is and adds wonderfully to the tense hilarity that powers so many of The Hangover’s best scenes.

We’ve done LeBron the favor of ignoring Space Jam 2, and good thing too, because while there is nothing funny in that film, LeBron is one of the few funny things in Trainwreck, and surprisingly, he’s in a lot of it. The world famous basketball legend is totally unaffected, playing on his public persona at length and pulling off a running gag about his cheapness and some great comic chemistry with co-star Bill Hader.

For whatever reason, Kareem is under cover moonlighting as Roger Murdoch – Airline Pilot aboard the doomed Boeing 707. He’s a little on edge, close to being caught out by a young boy in the cockpit, but he just can’t resist snapping back at the kid after hearing all about his dad’s critiques. “Tell your old man to drag Walton and Lanier up and down the court for 48 minutes.” Like everything in Airplane! , you’ll find no sense in this cameo, but it’s perfection nonetheless. 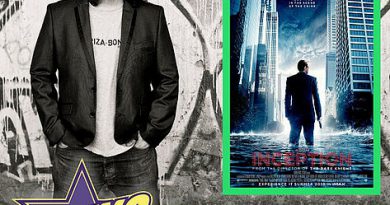 Most Anticipated Art Films of 2022

All the tea with Sonic the Hedgehog